RS-232 is a standard communication protocol used to connect computers and their support devices to enable serial data exchange. Simply RS232 defines the voltage for the path used in the exchange of data between devices. By determining the general voltage and signal level, the general and minimum pin wire configuration, the number of control signals. This standard is designed with specifications for electromechanically teletypes and system modems and does not specify elements such as character encoding, character framing, error detection protocols etc. which are important features when data transfer takes place between a computer and printer.

The working principle of RS232 can be seen in the following scheme: 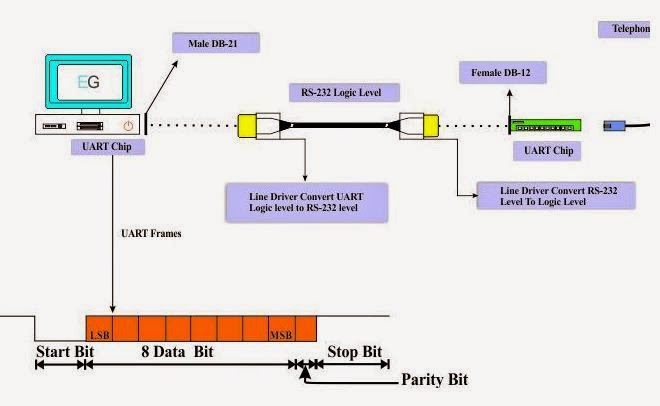 UART, driver line and RS232 consists of three separate parts in each system has its own characteristic features. UART and line drivers are part of RS232 to improve system quality during data exchange series.

A standard definition is given by EIA to define RS232 as "an interface between data terminal equipment and data communications equipment". A typical RS232 system is shown below.

DTE-A DTE stands for Data Terminal Equipment which is the final instrument that converts the user information into a signal or reconverts the received signal. It is a station functional unit that serves as a data source or data sink and provides a communication control function according to the link protocol. A male connector is used in DTE and has pin out configuration.

DCE-A DCE stands for Data Commnication Equipment. Being between DTE and data transmission circuits eg modems. The DCE device uses a female connector that has a hole on the surface to withstand the male connector.


DTE and DCE. These signals are the transmission line, the receiving line and the GND Ground. Both devices communicate with each other by handshaking. This allows DTE and DCE device systems to recognize each other before sending data.

Handshaking is the process by which a DTE device sends a signal to a DCE device to establish a connection between devices before the actual data transfer. This sets the communication channel parameters that are built between two devices before normal communication through the channel starts.

Handshaking allows to connect relatively heterogeneous systems or equipment through communication channels without the need for human intervention to set parameters. The same concept is used in RS232 to allow two devices to communicate with each other before the exchange of actual information.

All of these terms put together provide a complete picture of the RS232 system from DTE to DCE with UART, line drivers and RS232 as their connection to the device.
Getting to Know RS 232 Communications | Data Exchange 2014-09-29T06:23:00-07:00 Rating: 4.5 Diposkan Oleh: Admin
Facebook Twitter Google+ Linkedin Technorati Digg LintasMe